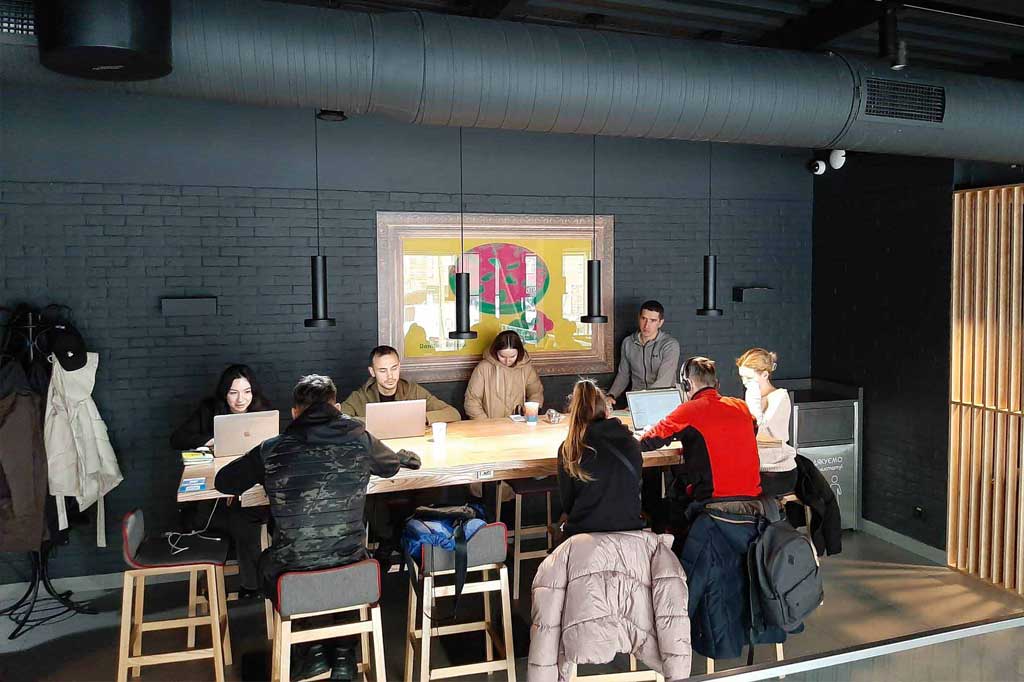 In November 2022 Dominos Pizza became a shelter for a local IT community in one of Kyiv’s city districts, as the Ukrainians continue to resist Russian aggression. Since November 2022, the shutdowns and instability of the electric power supply became major problems.

They were especially painful for IT professionals whose work and income depended deeply on the Internet.

Power shutdowns shocked the largest Ukrainian cities, with a population of 1-4 million people. For example, Kyiv, Lviv, Odesa, Dnipro, Kharkiv, and other urban centers that build the national economy.

Until recently, Ukraine’s electric energy costs were low compared with the U.S. or Europe. Even in the middle of the war, Ukraine was exporting electricity to other countries, including the European Union. Growing the export was strategic. The Ukrainian energy system was becoming strong and autonomous, as emphasized by a U.S. Department of Energy in July 2022:

Massive Russian air attacks on the Ukrainian energy system destroyed important infrastructure and became a threat to the whole region. (Nuclear power plants and hydroelectric power stations are vital to the Ukrainian energy sector.) As a result of the attacks, it suffered badly: 40% of the country’s energy system was out of order in October, according to UNIAN, and 70% of Kyiv citizens did not have electricity on November 25 (LB.UA).

In attempts to restore the power supply, the Government provided “rolling shutdowns” publishing their “schedules” like on the DTEK website:

Unfortunately, the schedules did not work — the Russian attacks on UA’s strategic infrastructure did not stop. On 25 November Russia attacked Ukraine with 78 missiles and 23 air strikes, according to LB.UA.

That became a real problem for businesses and IT freelancers because it was hard to plan, focus, or work productively.

Search for a work environment with good Internet and stable power became a new battlefield. That required outstanding resilience, perseverance, and creativity.

Invincibility Points: Response from the Government

The Ukrainian Government initiated “Invincibility Points” (or centers for “the unbreakable”) all over the country, calling businesses, NGOs, and even religious organizations to support the initiative. The citizens could come to recharge their phones and warm up.

A new website, Nezlamnist.Gov.Ua, was created, showing a real-time map of the Invincibility Points with an open invitation to add newly established centers.

Kyiv municipal authorities shared a list of the Invincibility Points in the city.

In the first days, more than 5 thousand points were installed. Unfortunately, it was not enough to solve the problem fully, as Hromadske reports. Yes, you could quickly charge your phone, but it was not the place to provide professional services for international (or national) employers or customers.

To continue working remotely, Ukrainian IT entrepreneurs, freelancers, and professionals put their Agile skills into practice.

They found all kinds of alternative solutions to the problem, identifying the places with an independent power supply and WiFi, such as:

For example, Nataliya Limonova, Founder of GIOS Inc. (interactive online Math learning platform), who just came back to Ukraine after representing the country’s EdTech industry in Helsinki with the “Google for Startups” delegation, came up with a creative solution, using a gas station for her quick online communications. The work never stopped for GIOS Inc. in Ukraine. Except for short coffee breaks.

Dominos: from Pizza Delivery to IT Shelter

Dominos Pizza located in the Southern area of Kyiv (known as “Teremki-2”), could not function fully because of the lack of power supply.

However, the facility was getting some power from a larger Ashan Store, which was enough to make coffee and provide Internet for all the visitors.

Very quickly the place turned into a local IT shelter, as professionals were warmly welcomed.

It is packed now with Web Developers, Digital Marketers, Data Analysis, Content Writers, and other diligent workers who support the economy in this crucial time.